For this series, we reach out to a member of the department who has a very particular obsession and ask them to share it with the world. In this edition, MFA in Creative Writing Student Daniel Barnum shares how their life—much like the landscape of television—was transformed by Buffy the Vampire Slayer. 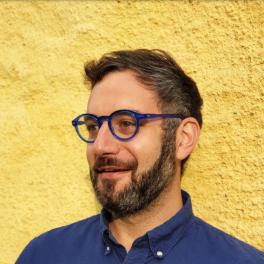 There’s a part in “The Body,” the sixteenth episode of the fifth season of Buffy the Vampire Slayer, when Buffy visits her sister, Dawn, at Sunnydale High School, interrupting her art class. Buffy has arrived with terrible news. The sisters’ mother, Joyce Summers, has died, suddenly (though not supernaturally), from a brain aneurysm. The audience already knows this, has watched the hero’s grief and disbelief cycle through the earlier scenes, has stared at the unblinking corpse of the fan favorite secondary character through a silent, prolonged shot after the opening credits. Silence deafens throughout the episode: when Buffy delivers the news to Dawn in the school hallway, we see her whimper and break down in reaction through the wide window of the classroom, but we do not hear her through the glass. The camera smoothly turns away from her honest, uncontrollable misery, to settle on the action of the students charcoaling at their easels. They are composing figures through negative space.

Bleak stuff, I know, but if asked to account for why Buffy the Vampire Slayer is a show I love obsessively, this scene and “The Body” as a whole make up some important, immeasurable percentage of my reasons why. I came to Buffy late, a decade after its original television run (1997-2002) had ended. In late 2012, I was in the clutch of totalizing grief in the wake of my own mother’s violent and sudden end that summer. I was stuck in the non period of my non-traditional academic career: after dropping out of college as a freshman, then attending classes intermittently as I moved from city to city, state to state for jobs, relationships, freedom, whatever, I had been out of any university environment for five years and had no plan to return. I was happy where I was. And then….

I started watching Buffy because it was there, on Netflix, and I needed something to background the long periods of sleeplessness I was experiencing. During high school, when the final four seasons aired, the show’s self-aware gloss on teen drama felt like pandering. When I watched it as an adult, attention hyper-focused in an attempt to tune out my trauma, I could see how it was playing with and against genre restrictions. I could hear how its contrived teenspeak pushed past the real into the sublime. I could feel how human its emotions were, even if its episodes followed formulaic plot structures and involved vampires, werewolves and seductions by praying mantis monsters. I spent my days alternately weeping and numb at work, in public spaces, or at home in the arms of my partner, but when I streamed Buffy late most nights, I would catch myself smiling at some instance of ridiculous wordplay or the sheer, stupid goofiness of Xander. I marathoned the early seasons because they provided a space in which I could still feel even when my days were at their lowest. The show had soul. When I arrived at “The Body,” it felt like Buffy was looking into mine.

One therapeutic model of loss developed by Dr. Lois Tonkin holds that grief never grows smaller, so we must grow larger around it. In the year after Buffy loses her mother, she falls into a deep depression – the real enemy, or “big bad,” of season six. She (and the entire world) is eventually saved by the healing power of friendship (okay, it’s TV). This friendship makes her stronger, bolder. It brings her back to herself, allowing her to grow bigger around her grief and carry on. In the real world, in the year following my great loss, I watched all seven seasons of Buffy the Vampire Slayer. I quit my job and got a new one and didn’t tell anyone about my mom. I went back to school full time and didn’t tell anybody about my mom. I studied film and television, with a focus on body genres – horror and melodrama – the mix of influences that most distinctly informs my favorite show. I was obviously obsessed (and still am), but I didn’t want to talk about why. It’s just an incredibly generative text, I would explain to professors wondering how I could write another term paper on Buffy. But I had my reasons. Negative space: life shaping itself around the contours of what’s missing.