Each month, the Communications Team reaches out to members of the Department of English faculty and asks them to elaborate on a current research or creative project they are working on or have recently completed. For this month, we asked Professor Elissa Washuta about her project, White Magic. 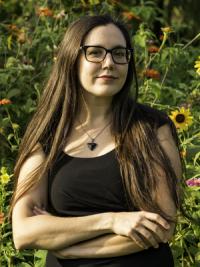 My manuscript-in-progress, White Magic, is a personal narrative about heartbreak, sexual violation and my process of becoming a powerful witch. Surrounded by cheap facsimiles of Native spiritual tools and occult trends, I learn to embrace the spirit powers and desperation witchery of my dispossessed and discarded Cowlitz/Cascade and Appalachian predecessors.

In these interlinked lyric essays, I place myself at the end of long lines of battle-worn ancestors: Coast Salish people and Irish and Eastern European immigrants to Pennsylvania’s Coal Region. These lines meet at the site of my colonially-broken body. My ancestors’ bodies were the sites of the violence and degradation that birthed the colonizing nation-state in which I now live. At the heart of survivance—theirs and mine—lies the reliance on spirit power and the supernatural. Engagement with the otherworldly is rarely taken seriously as a way of knowing in current white American epistemologies, but “magic” has been practiced in my ancestors’ cultures as means of resistance. Capitalist demands robbed the Cascade people of their traditional hunting, gathering, and fishing places, and expended the bodies of the men who died young from black lung in order to fuel a growing nation.

My manuscript-in-progress, White Magic, is a personal narrative about heartbreak, sexual violation and my process of becoming a powerful witch while dealing with legacies of American violence and commodification.

The occult is hot. Macklemore appears on Twitter burning sage; palo santo can be purchased on Amazon; sacred stones are torn from the earth and displayed on white tables for Instagram photos. But I have yet to see a deep literary engagement with contemporary pop-occult practices from an Indigenous perspective. In White Magic, my hopes for impact are twofold: to continue to work against the underrepresentation of Native women in literary nonfiction and to complicate the witchcraft fad as both an occult enthusiast and a concerned Native woman.

Is the project being funded or supported by any individuals or organizations that you would like to acknowledge?

The National Endowment for the Arts.

My co-edited anthology, Shapes of Native Nonfiction: Collected Essays from Contemporary Writers, which I’ve been working on with Dr. Theresa Warburton, is in production and will be published by University of Washington Press in spring 2019. Theresa and I are looking forward to launching and promoting that book. As far as my own writing beyond White Magic, I don’t think I’ll know what it will look like until the current book is behind me.