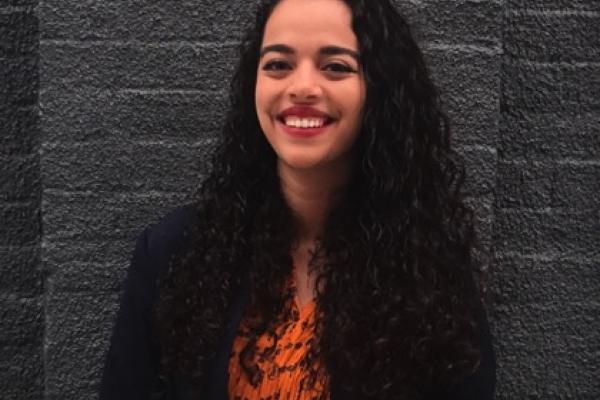 Those of us who are bibliophiles have likely encountered a book about a protagonist who, like us, loves, loves, loves to read. It’s only natural to read about readers, and to write books about bibliophiles. We often write what we know and who we know, as well as who we are—we readers can understand and relate to Elizabeth Bennet, Hermione Granger, Matilda, Anne Shirley, Jo March.

Our story begins like this: A child goes to visit family in a faraway land. Her grandfather is a writer, and one day the girl finds herself exploring his grand library. Lost amongst the heady smell of paper and leather bindings lining the walls, she comes across a book that snags her eye. She takes it off the shelf and begins to read. She catches the bug, just like that. Thus, the plot is set in motion for our bibliophile protagonist. But this is no work of fiction. Our protagonist, Laila Ujayli, class of 2018, has recently begun a new chapter of her story, which in past chapters has found her in the Middle East, in Ohio. Now, she heads to Oxford, England, thanks to being selected as a 2018 Rhodes Scholarship recipient. Pending approval from an Oxford College (the applications are due in this month), she will spend the next two years studying at Oxford where she hopes to specifically pursue world literatures and refugee and forced migration studies.

At Ohio State, Ujayli double majored in English and international studies which, given her personal history, isn't a terrible shock. Some time after her visit to Syria, she and her family moved to Saudi Arabia. They were living there when, in January of 2011, Arab Spring protests rocked the Middle East. Young Ujayli took notice, gaining an interest in politics and history. She also payed attention to the aftermath.“I was really engaged in the political realm, and I knew that that was something that I wanted to study in college and eventually work in that space,” she says. Ujayli moved back to the United States in time for her senior year of high school.

“My Saudi school was an international school,” she says, “but it didn’t have a very robust literature curriculum. So, I hadn’t done very much deep reading. And then, for senior year, one of our final projects was to write a paper on an influential work of literature. We had a list of titles to choose from.” She picked the title that sounded the coolest: “The Waste Land” by T.S. Eliot. “I remember talking to my teacher,” she says, laughing, “and he said to me, ‘This is going to be tough. You don’t really have the literature background to do this. It’s not going to make sense, it’s kind of all over the place.’ And I said, ‘No! I will do it!’” The first read did, indeed, make no sense. A notoriously difficult poem, “The Waste Land” is also packed to the gills with historical references and literary allusions, and unfortunately Ujayli was at a disadvantage. But it didn’t deter her. Insead, she made it her project to understand what was being said by the poem. This involved heavy annotation, scribbling in the margins of her printed copy, taking apart every sentence and dissecting the words Eliot uses in order to distill his meaning. Slowly and methodically, she pieced together the context and the language and began to understand the poem as a lamentation about postwar society where everything has begun to fracture, about how people have forgotten the old texts, about the struggle to make meaning out of fragments and hoist oneself out of the wasteland. “It was kind of like a puzzle,” she says. “The ability to do research and then find something new and come up with your own understanding of a text was just such an amazing experience. It was self empowering, because you're trying to find that knowledge on your own. Even if it makes no sense, you can find meaning out of it, you just need to put some extra work into it.”

It was at this point that Ujayli realized, in addition to international studies, she wanted to be an English major. And, so, she came to Ohio State, where she began to branch out in unexpected directions. She picked up a business minor. She enrolled in a class about the history of the Mongol Empire with Professor Scott Levi. “If you can—take it, take it, take it! There’s something awesome about shifting the historical map from what you’d learned before…it just completely screws with your idea of history and how it’s been painted, so limited to a single corner of the map,” Ujayli shares. She took several screenwriting classes, eventually declared it as her second minor, and even wrote a feature-length screenplay about Abd al-Rahman I (Google him, it’s worth it).

When it finally came time to settle on a senior thesis topic, Ujayli had already completed the English major. Working with Professor Steven Fink, she wanted to write a thesis that married her two loves, international politics and English, and so she chose to write deep analysis about a work of Turkish modernism titled A Mind at Peace by Ahmet Hamdi Tanpınar. “I found myself having to study by the political situation in Turkey,” she says, “and find out about the context and things that I hadn't known before. It was evidence that in order to really understand people and understand models of social change, you have to understand the stories they tell—you have to understand the context that surrounds them. Narrative and politics work hand in hand.”

As her undergraduate career came to a close, Ujayli began working closely with the Fellowship Office on campus, through which she applied for and was accepted as a Herbert Scoville Jr. Peace Fellow. Right now, she is living in Washington, D.C. and working for Win Without War, an organization dedicated to advancing progressive foreign policy. The Fellowship Office also nominated Laila for the Rhodes—in order to apply, you have to first be nominated.

The Rhodes Scholarship funds one to two years of graduate study at Oxford. “It’s about bringing people from around the world to study at Oxford,” Ujayli says. “[The Rhodes Scholarship] was started by Cecil Rhodes, who wasn’t a great dude.” An ardent believer in British Imperialism, Rhodes helped build apartheid in South Africa. His estate now funds the scholarship. However, the pool of potential candidates has widened in the hundred years since the scholarship was started, and today the Rhodes scholars are a diverse group committed to truly bettering the world. Laila was one of 32 accepted to the U.S. Rhodes program; she will be studying with Rhodes scholars from all around the world.

The application process involves a unique personal statement: absolutely no outside help is allowed. You can’t show it to anybody. Ujayli wrote about her visit to her grandfather’s library in Syria, her experience in Saudi Arabia and how her thesis helped her realize that her love of literature and narrative could intersect with geopolitical issues.The next step is an interview, for which Ujayli traveled to Chicago for the weekend, and on Friday night she had “coffee hour” with other finalists and judges. The next day, each candidate had just 20 minutes of time to interview, and then they were put out to pasture for lunch. “And then, you sit in a room and wait for the judges to deliberate,” she says. “Some people get called in for second-round interviews. Some people do not. I was not called in for a second-round interview. You’re told not to read into it, but you definitely do read into it in that moment! After that, you just sit until the judges unexpectedly burst into the room, and everyone scrambles to their feet, dropping the cookie or coffee they were drinking and trying to look all presentable.” The judges read out the names of candidates who were accepted. When she heard her name, Ujayli says, “it didn’t register.” She was standing next to another candidate who was also accepted and so they congratulated each other, shellshocked.

The most amazing part about this whole process, Ujayli thinks, is how many people came together to help her reach this point. She needed five to eight recommendation letters, and she submitted eight. “It’s like a constant pinch-yourself moment,” she says. “I don’t think it’s going to feel real until I’ve landed in Oxford. I am just so grateful for this opportunity. Between the English department, Ohio State in general and the Fellowship Office, it really takes a village to get this to work out. It’s a collective victory.”