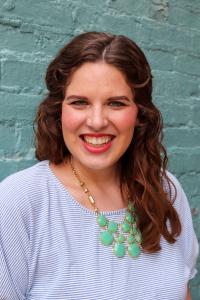 Molly Becker ’13 was not one of those kids like Akeelah in the 2006 movie, whose passion for words led her to compete in local spelling bees in hopes of becoming a national champion. When Molly entered The Ohio State University as a freshman, words were not yet a priority for her. She wasn’t even sure what she wanted to major in, trying political science, then psychology and sociology, then English education before settling down as an English major. Eventually, by a route almost as indirect as her choice of discipline, Molly found a path that led from her English degree to the Scripps National Spelling Bee, where she now works as Senior Manager of Editorial Programs.

Molly’s first jobs after graduation were at what she calls the “two world-class publishers” based in Columbus, Pearson and McGraw-Hill. At Pearson she did “glorified customer service,” but the experience led to an opportunity to join McGraw-Hill’s K-5 reading intervention program as an editorial assistant. Molly, who had loved editing since college, found the managing editorial process exciting. Sophomore year she had taken her first workshop-based course, Introduction to Creative Nonfiction Writing, and had learned she was more eager to take her classmates’ writing home to comment on than she was to submit her own writing for comments. “Taking a convoluted sentence and distilling it so that the author's point could shine was, and still is, so much fun for me,” she explains.

Although Molly was happy at McGraw-Hill, she wanted to relocate to Cincinnati to be closer to family. She happened upon an opening for an editor at the Scripps National Spelling Bee, landed the job, and has now worked there for six years. Molly leads the team that comes up with words, questions about words’ meanings and sample sentences for use at the national Bee, the highest level of spelling competition out there for school-age children.

Thinking about the kids who come to the national Bee, Molly likes to picture “the speller’s journey.” Eleven million students, some as young as five, participate in spelling bees around the country each year. They compete first in the classroom bee, then the school bee, then a district bee, a county bee and a regional bee. All the regional winners travel to Washington, D.C., in May for the Scripps National Spelling Bee. The students compete at their own grade levels, spelling words from lists that Molly’s team has compiled. The difficulty ranges from kindergarten words like “frog” and “cats” up to what Molly calls “the craziest words” like “Llullaillaco” (I had to ask: it’s a volcano in South America). At the lowest level, Molly’s team makes up a list of 450 spelling words that they’ve selected from children’s books. They also prepare a list called “Words of the Champions” with 4,000 entries. That one is the basis for the regional competitions, where aspiring champions must also spell “off-list words” to win their regions.

Now in its 97th year, the Bee has undergone many rule changes, one of them being the decision to allow proper names that makes “Llullaillaco” fair game. Any word in the Merriam-Webster Unabridged online dictionary is now allowed. Molly says that the savviest spellers know the “flashier words” in the dictionary, the ones that “stick out because they are fun.”

Fun is, it turns out, a bigger part of the Bee than non-spellers might imagine. The “word nerds,” as the regional champs like to call themselves, attend Bee Week in Washington before the competition. Molly calls it a “summer-camp” experience, where students say things like “I found my people! This is the first time I felt like I fit in!” Word nerds make best friends during Bee Week.

Molly’s favorite part of the Bee is that it is about “so much more than academic achievement.” She explains, “The Bee is all about teaching kids poise under pressure, public speaking, courage, bravery, camaraderie.” Molly marvels at “the confidence it takes for them to get on stage, the thrill they feel at getting it right. It’s amazing to watch!”

A personal hope of Molly’s—as well as an institutional goal of the Bee—is for the competition to become more diverse, inclusive and equitable. One strategy is to generate more in-house study materials. “Some families can pay a private spelling coach $300 an hour,” Molly says, “and the Bee has big dreams about how to combat that, to make access to entry much easier and truly open to everyone.” As Molly is quick to point out, the problem of unequal access pervades every arena of competition for children. Still, “The Bee wants to be for everyone—for English-language learners, kids just starting school, kids coming from someplace where academic achievement is not valued.” The Bee also wants to be for kids who may not have ambitions to win the top trophy, but who can find something in the program that will spark a desire to learn more.

Elements of all Molly’s majors come together in this vision for the Bee: politics, sociology, psychology and education as well as English. Indeed, Molly’s Ohio State experience has remained with her in many positive ways. Her favorite Buckeye tradition was “Singing ‘Carmen Ohio’ at the end of every football game, win or lose,” a practice that is in line with the spirit of her vision for the Bee. Asked what stands out about Ohio State for her, Molly exclaims, “I love Ohio State!” She always tells prospective college students who cross her path that they should consider Ohio State because there is nothing you can’t study here. “The most magical thing is you can pursue whatever path you want, and everything is open to you.” Looking back, she is relieved she did not go to a college that specialized in the social sciences that were her first choice of major, because Ohio State offered so many more possibilities when those majors were not as satisfying as she had hoped. “My education at Ohio State has paid for itself a hundred times over by now!”

As much as her English major skills have paid off in her job, Molly stresses that what she learned in English classes is important for everyone who works in a corporate setting. Most important, according to Molly, was to learn clarity and concision of communication. Being concise is crucial because “nobody has time to read a 10-paragraph email!” She is struck by how often she hears people at work negatively critiquing coworkers’ writing style, often behind their backs. Writing is, she feels, undervalued in the workplace, but “being able to effectively and concisely communicate goes a long way in making people want to work with you.” Her advice to students who are considering their options is to keep in mind that English courses teach you to be pleasant to work with, not just by communicating clearly but by providing practice in “how to disagree with someone and still work with them.” Those skills don’t get taught in the workplace, Molly says, “but English classes teach them.”

by Robyn Warhol, College of Arts and Sciences Distinguished Professor of English