Each month, the Communications Team reaches out to members of the Department of English faculty and asks them to elaborate on a current research or creative project they are working on or have recently completed. For this month, we asked Professor Jesse Schotter about his project on travel guides. 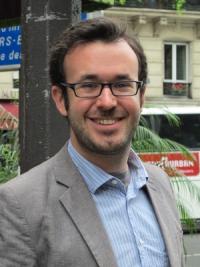 My first book, Hieroglyphic Modernisms: Writing and New Media in the Twentieth Century, which came out in 2018, argued that writers and film directors in the early twentieth century used the metaphor of Egyptian hieroglyphics to imagine the relationship between writing, sound and cinema. While researching that project and exploring the importance of Egyptian archaeology and tourism to the popular culture of the 1920s, I began to examine the travel guides of the period, which I found really fascinating. They’re a new genre in the late nineteenth-century, so what a travel guide should do and what it should look like was still in flux. So now I’m starting work on a book titled History and a Guide: Modernism and the Forms of Travel. I found a lot in common between guide-books and modernist novels from the period, like Virginia Woolf’s Jacob’s Room and E.M. Forster’s A Passage to India—both of which invoke travel guides—which likewise experiment with form when it comes to representing a city, country or person. In delving into guide-books, I realized they were animated by the same tensions as modernist novels, particularly when it comes to just how selective they should be: how much of the world or of the city they should choose to focus on. So I’m going to be tracing these ideas from Woolf and Joyce up through W.H. Auden and John Betjeman and maybe even into the French Situationists.

My project reads the modernist city novel alongside the travel guide to argue that both are formally experimental genres that grapple with the question of how—and even whether--to represent the encyclopedic diversity of the modern city.

No one has really looked much at travel guides, which are often considered pretty disposable. When they have examined guide-books, they’ve focused on their content—what they say about different cultures—and not on their form: on how they’re organized and structured. So while there’s been a lot of recent attention in modernist studies to travel writing by the modernists, very little has been written on the guide-books that helped make these travels possible.

An article from this project, “’Objects Worthy of Attention’: Modernism and the Travel Guide” is forthcoming in the journal Modernism/Modernity, and it feels like there’s a lot to work with in this topic, so I’m looking forward to expanding this material into a book.

I also recently published an article for the online journal Full Stopon the influence of existentialist philosophy on the classic children’s fantasy writer Lloyd Alexander. He was actually the first person to translate Jean-Paul Sartre into English, and it turns out that Sartre’s ideas shaped what’s so distinctive about Alexander’s novels. So I don’t know quite where those ideas will go in that future, but I found that topic really compelling.