Each month, the Communications Team reaches out to members of the Department of English faculty and asks them to elaborate on a current research or creative project they are working on or have recently completed. For this month, we asked Professor Jared Gardner about his two books-in-progress. 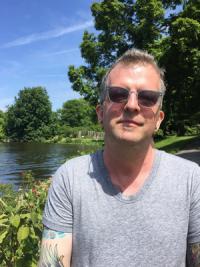 I’ve always been someone who works in several different areas—early American literature and culture, media history, film, narrative medicine and comics— and for the most part that has worked well for me. But as I’ve arrived at the proverbial “mid-career” point, I’ve found myself wanting to bring some of my interests together to see how they might connect. So I am working on two book projects designed to do some connecting.

The first one is called Patient Time and it is about representations and theories of time in narratives about illness, including prose, graphic narrative and film. I am still struggling to learn some of the philosophy of time I need to make this project work, but I am getting close.

The second book project is very tentatively titled Distinctions Drawn, and it is a study of the intersections and cross-influences between  racial “science” and caricature/cartooning as both developed in the 18th and 19th century in Europe and the U.S.

Always a tough question to answer. Honestly, I never know if my books will be significant until I publish them and see if anyone finds them useful. I tend to focus on questions I find fascinating, and then learn everything I can that will help me provide some answers. My books tend to be me sharing the cool stuff I found. So far I’ve been lucky in that others have found these things interesting too. I sometimes joke that my methodology is the New Stuffism: “here’s some cool stuff I found, and here’s why I think it is cool.”

Not at the moment. I could see the second project expanding into something that might well become collaborative. It is much bigger than I thought it would be when I started.

I’ve always thought it would be fun to spend my later years working on a big literary history of Anglo-American science fiction. If I can talk Beth Hewitt into collaborating with me on that, that would be my dream.