Each month, the Communications Team reaches out to members of the Department of English faculty and asks them to elaborate on a current research or creative project they are working on or have recently completed. For this month, we asked Professor Elizabeth Zeman Kolkovich about her research on Shakespeare’s masque scenes. 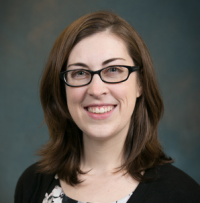 I am writing a book on Shakespeare’s masque scenes, including both how Shakespeare repurposed court entertainment and how, in later time periods, others remade masques into new forms for new audiences. This book bridges two subfields of Shakespeare scholarship: source study (what were Shakespeare’s influences?) and adaptation study (how have Shakespeare’s plays been altered to suit later audiences and cultures?). Just as Shakespeare used fragments of masques to interrogate identity and community, later adaptations have used masque scenes to insert culturally relevant erotic play and political commentary. I am telling a new story about how Shakespeare became a cultural icon through the elision and adaptation of odd moments.

My book investigates how Shakespeare repurposed bits of a spectacular kind of court entertainment called masques and how these scenes have been interpreted, reinvented and received at various moments in various media.

Masques and masque-like scenes appear in almost half of Shakespeare’s plays, involving some of Shakespeare’s most famous characters and speeches. For example, Romeo and Juliet meet at a masque, and Prospero interrupts a masque he has devised in The Tempest to deliver his well-known speech beginning, “Our revels now are ended.” Although surprisingly little scholarship examines masques in Shakespeare, they are fruitful spaces for investigating how we try to make sense of the early modern past in which Shakespeare and his contemporaries wrote, as well as how we use Shakespeare to understand the present. We can learn a lot about shifting cultural views of gender, sexuality, race and other aspects of identity through the history of Shakespeare’s masque scenes. Masques inserted in professional plays use disguise to deceive and are repeatedly linked to male virility and women’s empowerment or exploitation.

No, although the idea for this book grew out of my teaching undergraduate Shakespeare courses. If Shakespeare is meant to be accessible in the classroom or in today’s theater, antiquated masque scenes become a problem. They are relics of a past we have difficulty accessing. When I noticed how (rightfully) puzzled my students were when encountering these scenes, I became interested not only in how we have remade masques into something today’s audiences would understand, but also how we have repeatedly redefined our assumptions about Shakespeare through such adaptations.

I am grateful to the Mansfield Campus for supporting the initial stages of this project with a research leave and funding for travel to archives.

This project is still in its early stages, so I have plenty of work left to do. I am writing it primarily for my fellow Shakespeare scholars, but especially because the book is about accessibility and audiences, I hope to write it in a way that makes sense to students, theater professionals and interested non-specialists. Masques are weird and fascinating, and so is Shakespeare.

Besides this single-authored book, I am part of a team of scholars creating an open-access, digital edition of the poetry of Hester Pulter. Pulter, who lived in seventeenth-century England, wrote more than 100 poems and a prose romance—all of which survive in one manuscript that lay unread, it seems, for more than 250 years. Her poetry is beautiful and moving, and it reveals her as well-read and well-versed in poetic convention. It engages with a variety of topics, including science, politics, religion and personal loss. The website is called The Pulter Project and is spearheaded by Leah Knight at Brock University and Wendy Wall at Northwestern University. There are several contributing editors, and each of us has an individual style and approach. Each poem will be edited multiple ways by more than one editor, and readers will be able to put these different versions side by side. I am excited to show off our first version soon. Although very few of my colleagues and students have heard of Pulter, her poetry is absolutely worth reading and teaching.

I am also starting to play around with the possibility of another project on the literary networks of women in a particularly influential Renaissance family, the Stanleys. I am writing a couple of essays now on the reading and patronage of one of these women and might develop some of this material into a book-length project in the future.