Each month, the Communications Team reaches out to members of the Department of English faculty and asks them to elaborate on a current research or creative project they are working on or have recently completed. For this month, we asked Professor Elizabeth Weiser about her project on heritage museums and national identity formation. 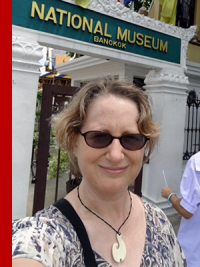 I start from the question of what heritage museums as sites of rhetorical persuasion contribute to national identity formation. I argue for a rhetorical reading of national museums as sites where multiple, intersecting and at times conflicting acts of identification converge. Out of these acts of identification and division, a sense of the national story is repeatedly forged. This matters because our understanding of who we are as a people--the epideictic celebration of our origins and values--determines the parameters of what we think we can and should do together. Our story of where we came from shapes our sense of where we're going/can go, in other words--and that story is curated in the national museum.

Our sense of who we are shapes our understanding of what we can and should do as a people, and across the globe that story of national identity is curated in national museums, which I study through a rhetorical lens.

My research argues that we rhetoricians need to examine the way that civic identity in modern diverse societies is enacted not only on the political and media stages we expect but also at the intersection of the real and the aesthetic. It posits a civic role for aesthetic endeavors today, which is why the research was partially funded by the Mershon Center for International Security Studies. I'm looking at national identity formation across a variety of political systems, after war and oppression, and in the face of globalization, and I'm saying that our English studies realm--of culture, of aesthetics--plays an important role there.  My research is also significant for our field in that it crosses disciplinary lines--I work with rhetoricians from both English studies and communications, of course, but also with scholars in education and museum studies from around the world--so it is significant in that it argues for (and hopefully demonstrates) a form of interdisciplinary and international research that broadens our field.

I have colleagues around the world whose insights contribute to my work. Undertaking the book project, I spent a sabbatical working in Europe with museum studies scholars on a European National Museums initiative. I've also collaborated with scholars--both professors and graduate students--in the Rhetoric Society of Europe and in ICOFOM, the International Committee on Museology. Here at Ohio State, I worked with three wonderful graduate students who were working on museum projects several years ago. After they graduated, however, no one since has been interested in museum rhetoric, which I find particularly unfortunate since it is such an apparently growing interest area in so many other universities--all the work on public memory, for instance, often touches on museology. I think my work goes farther than that, but what they're doing is a key contribution to the field.

The research for the book itself, which included going to over 60 museums in 22 countries on six continents, was funded by a variety of Ohio State grants, including a generous research grant from Ohio State Newark, sabbatical funding from the Mershon Center, and various travel grants from OIA and the College of Arts & Sciences. I know a lot about traveling cheaply and lightly now.

There are still museums left to conquer! But really, I don't want to just keep doing the same thing with small differences--I find that dull. I just finished a collaborative book chapter with a geographer and an American Indian studies scholar on the changing heritage status of the Newark Earthworks, and I'm talking with a graduate student in political history in Sweden about a collaborative effort around the House of European History and the formation of a "European" identity. I also have an idea about the National September 11 Museum that I want to pursue. But for more long-term projects, I'm starting to look into a book on the Earthworks (an indigenous World Heritage site and a private golf course! How much more rhetorical can you get!), and a colleague and I are just beginning an edited collection on teaching Kenneth Burke. When I'm not wearing my museologist hat, I'm actually known as a Burke scholar--my first book and numerous articles were about the birth of Burke's modern rhetoric in conversation with the New Critics of the 1940s--so I'd like to keep contributing to that part of the field, as well.

I'm also teaching myself French, for fun; I'm shopping around an urban fantasy novel, looking for an agent (and writing the sequel); and I do a lot of biking. Then there's the whole teaching job...