Lord Denney's Players Adapt Play into 'Much A-Zoom About Nothing'

Lord Denney's Players Adapt Play into 'Much A-Zoom About Nothing'

The show must go on.

It’s as true on Broadway as it is for Lord Denney’s Players (LDP), a theater troupe housed in the Department of English. 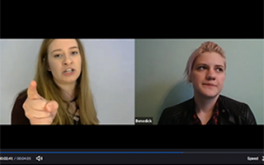 LDP was all set to raise the curtain on its production of Shakespeare’s “Much Ado About Nothing” at the Ohio Union in late March, but the coronavirus had other ideas. With the campus closure going into effect over Spring Break, LDP had to find a new way to make the Bard’s play work.

“We wanted to get that closure for the cast,” said Hannah Woods, a senior majoring in English who is directing “Much Ado About Nothing” for her senior thesis. “We had been working on this since the beginning of January. We wanted to have something, even though we were far apart, that we could still come together and share.”

The cast already had their lines memorized and had plenty of on-stage chemistry for their adaptation, which was to be a version of the play set in 2012. But instead of a live audience and backstage costume changes, Woods and LDP Creative Director Sarah Neville, an assistant professor in the Department of English, quickly adopted an even more modern technology.

Rather than putting on a live play, the troupe shifted to a pre-recorded production that was assembled largely on Zoom. The actors, all abiding by social distancing guidelines, spoke their lines into screens.

LDP has limited finances, being funded largely through the generosity of an anonymous alumni donor. The troupe also welcomes anyone who wants to take part, including first-time actors or set designers who have never used a drill before. With LDP now in its sixth year, this was the perfect time to utilize a lesson Neville had learned from previous productions.

“When you have a constriction on your activity — you don’t have a lot of money for costumes, a lot of money for props, actors who have never been on stage before — lean into that,” Neville said. “Don’t try to hide or run away from it. If you can’t get out of something, get into something.”

Some examples of that? Instead of prop letters being delivered on stage, the characters interacted on screen via text message. Instead of large dance or wedding scenes, the troupe got creative with editing.

The whole process came together with the help of ASC Technology Services’ Scott Sprague, Doug Dangler and Paul Kotheimer as well as Elizabeth Falter, the Department of English’s digital media specialist. With their tech savvy, the recorded sessions were transformed into a two-hour film. Scenes recorded in standard Zoom format with students in front of their laptops were spliced together with smartphone recordings and social media posts.

The finished product premieres on the Department of English’s YouTube channel at 8 p.m. on Friday night. The cast will then be available at 10 p.m. for an after-party of sorts, discussing the production live via — what else? — Zoom. 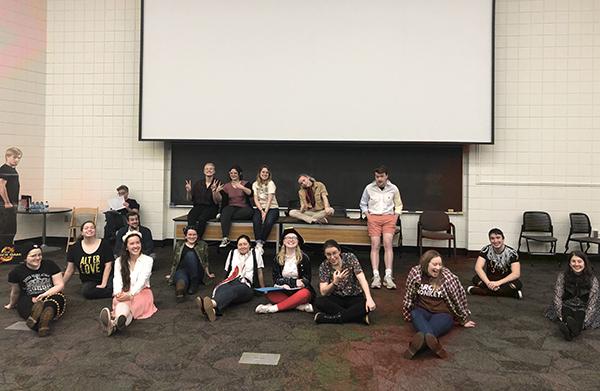 The cast of 'Much Ado About Nothing' posed for a photo before campus restrictions went into place.

The technology also makes for an interesting academic exploration of “Much Ado About Nothing,” which, like many Shakespearian comedies, involves gossip, misinformation, misinterpretation and taking things out of context. With those elements common in modern technology and social media, it was easy for this modern Zoom production to draw out those themes in the original play.

Woods, who successfully defended her senior thesis on April 6, admitted to being a bit discouraged initially by the coronavirus derailing the play and her cast not getting to experience performance in front of a live audience.

But by the time they figured out how to adapt the play digitally, she said it provided a unique challenge that could reach a larger audience long-term than their theater in the Ohio Union can hold.

“I think that this is another experience under my belt of being forced by circumstances to still make art wherever you can,” Woods said. “So, while this definitely isn’t necessarily what any of us envisioned, it really just goes to show that you can create art and make joy no matter where you are.”

Original article published by the College of Arts and Sciences.