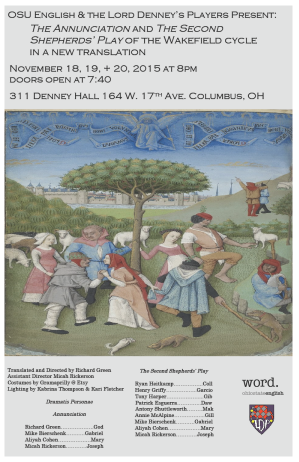 Lord Denney’s Players’ second production, The Annunciation and The Second Shepherds' Play of The Wakefield Cycle, premiered on November 18, 2015, and ran for three nights. The play featured the acting talents of Ohio State undergraduates, graduate students, staff, faculty, and alumni. The production was directed by English Professor Richard Green.

Four cycles of biblical plays (from the Creation to Doomsday) survive from late medieval England, of which the one from the small Yorkshire town of Wakefield is arguably the best; it is particularly distinguished by the work of an anonymous playwright, often called the Wakefield Master, who was responsible for six of its thirty plays, including two Nativity Plays. The second of these, The Second Shepherds’ Play, is often said to be the finest example of English medieval theater, combining broad farce with a tender devotional scene at the end. Also from the cycle, the Annunciation tells the story of the Incarnation and, like The Second Shepherds’ Play, combines tender devotion and farce.